The Blue Fire Update
The long awaited update is finally here! Thank you to everyone who contributed to this update. There are a lot of new cool features for players & server owners to enjoy! This update is for Spigot versions 1.16.1 and above!

Hello everyone, I am happy to announce the release of ProjectKorra version 1.8.7!

It needs to be noted that this version of ProjectKorra is NOT made for Minecraft version 1.13 and most likely will not work on it.

That being said, this build has been exactly one year in the making. A lot of work has gone in to make it as stable as possible so big shoutout to the entire team! Let's look at some of the exciting new additions and fixes:

> Hold shift to draw a shield of fire that will protect you from oncoming attacks!
> After you draw that shield, click to fire them forwards towards your enemies!​
- Added a drop item configuration option for Earth Tunnel.

> Determines whether Earth Tunnel will drop items if Earth reversion is off.​
- Added angle configuration option to Catapult.

> Determines the max angle one can launch themselves at.​
- Added cancelWithAngle configuration option to Catapult.

> Determines whether an incorrect angle will cancel the move from happening as opposed to just correcting it.​
- Added additional melt functionality to Phase Change causing snow layers to melt one at a time.
- Added configuration options to customize elemental sounds.

> ProjectKorra's page can be found here.​
- Changed Earth Armor so that being paralyzed/hit by a Chiblocker immediately disables the ability.
- Moved all Combo's into their own respective classes.

> Very similar in behavior to the old version but much for aesthetically pleasing.
> Added a requireAir configuration option to stop people from creating air pockets underwater.
> Added a clickDuration configuration option to determine how long the click burst will last.​
Removals:
- Removed Air Bubble
- Removed Firebending passive which allowed firebenders to extinguish themselves faster.


@Coolade has completely reworked the ProjectKorra ability collision system and has made it possible for you to customize what abilities interact with one another. This means addon developers can customize their abilities collisions with stock moves and even create new events that occur when moves collide!

@Sobki created a new Passives API to match our Combo API. This means that addon developers will be able to easily create passive ability addons and we will be able to implement your passive ability suggestions! Passives have names and descriptions to help users. Additionally, passives are given by default but they can be removed via permission node. 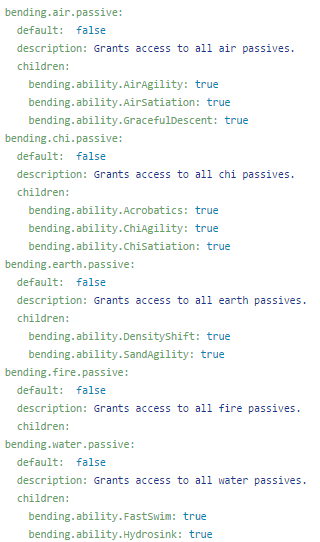 EarthArmor will now reflect Stained Clay colors in its appearance and has a new Max Duration config option.

AvatarState now has config options for the buff it applies to each Ability variable. Shoutout to @Loony

The bending help command now displays a usage message for all moves with a brief instructions of how to use the move in addition to the old move descriptions. Shoutout to @Loony 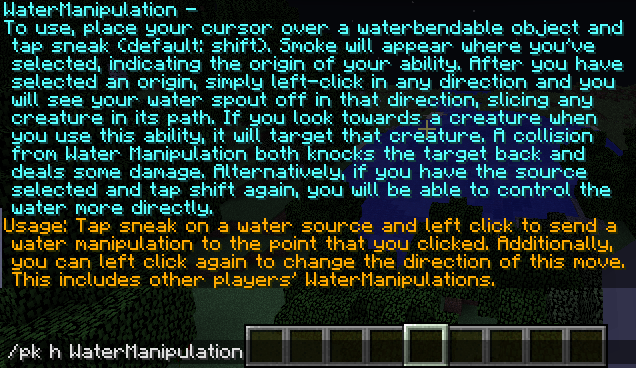 As many of you know, PhaseChange was one of the largest processes in ProjectKorra. This was due to a lot of faulty design that went into the original. @Simplicitee has completely reprogrammed the move from scratch to add new functionality and to make it much more efficient. Some of the biggest changes made to PhaseChange are the new thaw mechanic and freeze mechanic. Thawing is no longer instantaneous, instead, ice will gradually melt outwards from a center point. As for freezing, the ice generated by PhaseChange will only cover the outermost layer of water by default. The amount of layers can be changed in the config.

HeatControl has been completely reprogrammed by @Sobki to add new functionality and to make the move much more efficient. Cooling now spreads out initially as magma and then cools to stone or cobble.


Fixed WaterManipulation having the ability to select other water moves.
Fixed BottleBending issue which resulted in players being unable to waterbend.
Fixed issues with QuickStrike, SwiftKick, RapidPunch, and Immobilize.
Fixed FireWheel and AirSwipe being stopped by snow on the ground.
Fixed being able to go insanely fast with AirScooter via auto-run.
Fixed gold tools / weapons not being considered weapons in the "CanBendWithWeapons" config option list.
Fixed Combos being able to be used with weapons when "CanBendWithWeapons" was set to false for that Element.
Fixed EarthTunnel not reverting snow and plants.
Fixed EarthTunnel being able to "tunnel" through lava.
Fixed EarthTunnel removing earthbendables under snow without removing said snow.
Fixed LavaFlow incorrectly setting Double Plant blocks to air.
Fixed LavaFlow lava becoming permanent after a reload.
Fixed LavaFlow spawning particles on non-earth materials.
Fixed Flight getting a huge speed increase if you sprint.
Fixed being able to enable more than one stance.
Fixed various IllegalArgumentExceptions throughout the plugin.
Fixed various NullPointerExceptions throughout the plugin.
Fixed BloodBending's odd behavior when moving selected entities.
Fixed the bind command not catching second arguments that are not numbers.
Fixed WaterArms spear not work correctly when the "Sphere" config option is set to 0.
Fixed the red "null" message appearing when binding an ability whose element is toggled.
Fixed DamageHandler firing EntityDamageByEntityEvent an incorrect number of times and sets the cause of said event correctly.
Fixed HealingWaters being able to duplicate water bottles.
Fixed AirShield not properly blocking FireBlast, EarthBlast, and WaterManipulation.
Fixed various ability descriptions not using generic control names.
Fixed AirSwipe not properly respecting its cooldown.
Fixed BottleBending behavior which resulted in a bender not being able to bend.
Fixed Immobilize not being activated correctly.
Fixed SubElement moves not displaying the proper death message.
​
Hey you? Yeah you! What do YOU think WE here at ProjectKorra should work on next? Give a shoutout in the comments!​

Hey, everyone! As promised in our last update here is a shiny new build! I know it may be a tad confusing but in order to maintain consistency between all our plugins we are going to be changing how we display version numbers for core. We will be using this format <Breaking Version>.<Major Version>.<Minor Version> For instance, this build is the first minor build of the 1.8 major release so it can be written as 1.8.1. This build takes care of a lot of issues and errors we found in the 1.8.0 release so I highly recommend you update to it ASAP. In addition, this build contains a few cool new changes that we hope you like! Be sure to comment the feature you like the most!