Another old suggestion of mine...

Description:
Earth could an Earth Combo and something Sand related, so I figured I'd create this.
Earthbenders were shown to be able to sink Earth in a matter similar to quicksand. I mean, it says it right in the wiki.

Therefore, this combo could be used to catch unsuspecting opponents off guard. While it's not quite the same as it was in the show, this is my idea, and I think that the general idea of adding an earth-sinking like ability would be beneficial to Earth to say the least.

The Combo would be Collapse (Right Click 2x) -> EarthGrab (Hold Sneak) -> EarthGrab (Left Click 1x)
This would effectively launch the EarthGrab projectile that travels across the ground. However, this projectile would use blockcrack sandstone particles, and if it hits the opponent, it would create an area that looks like that this around them. 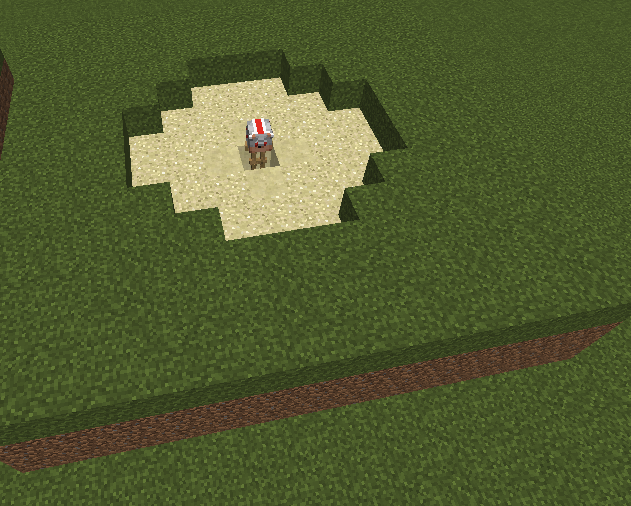 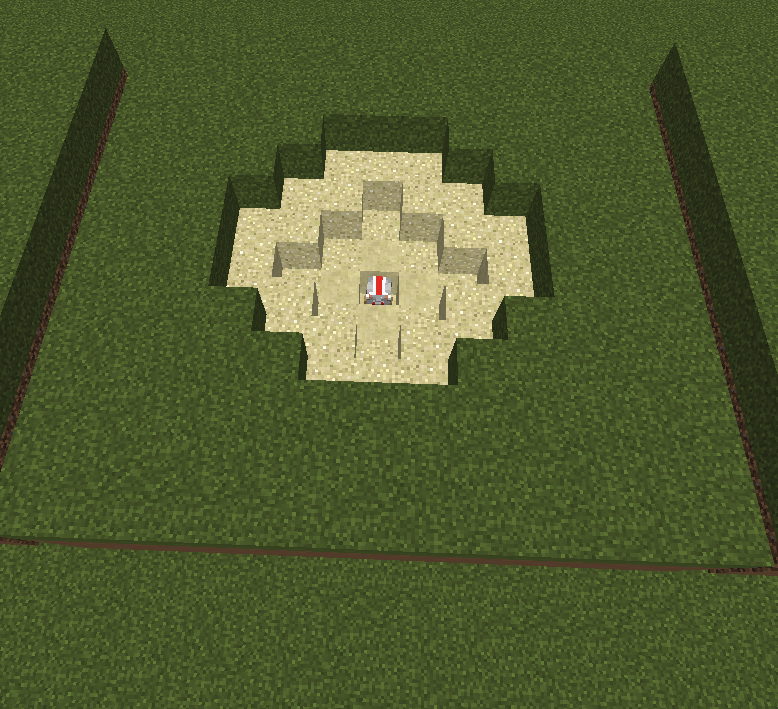 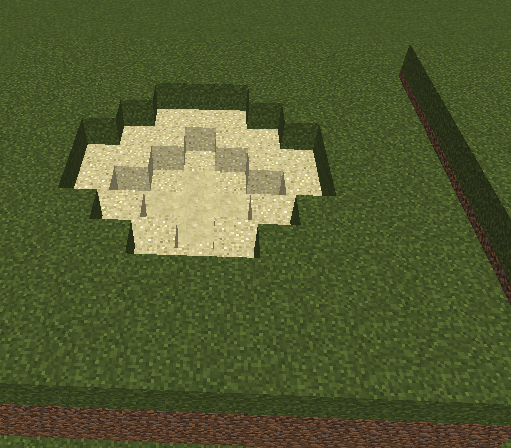 You progress through the stages by sneaking with Collapse at the area. The person that is trapped in the initial hole cannot jump out, has slowness 6, and can only get out by breaking a sandstone block that surrounds them. Quicksand can only "trap" one person, and anyone else in the sand has slowness 2 until they get off the sand. When you advance through the stages, anyone that is in the sand is drawn towards the center when you move through the Stages. For example, if a person is on the edge of the sand in Stage 1, and you collapse the sand to Stage 2, they would be drawn in to the center. They would not be able to go in the area that the trapped person is in. In Stage 3, you would start suffocating. However, like the rest of the stages, you would be able to end it by breaking the sandstone. When you break the sandstone, the ground would begin to revert to normal.

At the time that I took these pictures, I used the seamless sandstone slab block. However, upon testing how fast it is to break (which it isn't), I concluded that it'd be best to use sandstone blocks, as for they're easier to break and would cut the crap on this move.

EDIT 1: Also, Earthbenders have two options to break out of the move.
One would be to charge up catapult up to Stage 2, which would forcefully break the sandstone blocks that would normally surround the trapped person, and eject them up, ending the combo.

Earthbenders would also be able to ruin the quicksand, by charging up shockwave and releasing it, effectively shifting the sand quick enough that it disrupts the Earthbender's grip. This would be represented by ending the slowness effect on all players, and changing some of the sand to coarse dirt if it started on grass-y materials, or changing some of the sand to gravel if it started on stone-y materials. The default duration for each stage would be somewhere between 5 - 8 seconds, with a config option for the combo to progress a stage after the duration, or for it to just end.

EDIT 2: There would be config option to terminate the ability if LavaFlow warms up in the Quicksand.

EDIT 3: Airbenders would be able to break out of Quicksand by using Tornado to propel themselves upward. When activating tornado and aiming it down to propel yourself up, nothing would happen at first; you wouldn’t go up and instead, only sandstone block cracks would appear in the quicksand pit. However, after 3 seconds of holding sneak on tornado, you would start to rise, triggering the quicksand to end just like in EDIT 1, freeing the airbender.

Additionally, an idea that I’ve come up with to further help balance this idea is that the Earthbender runs the risk of losing focus on Quicksand. By this, I mean that if the Earthbender takes up to 2 - 3 hearts of damage while this move is active, they’ll lose concentration, and the combo will end, triggering the cooldown.

Also, no matter what, no lava can be formed in the quicksand pit with a config option, this does not only include lava, but also any other future lavabending moves that are to exist.


By ArchBear_Vega:
While your idea provides many utilities for earth and constructs an entirely new strategy for Earthbending, this suggestion has 2 inexcusable flaws preventing me from accepting them. The first flaw pertains to the duration in between each stage of the ability. In your suggestion you state that there will be a 5-8 second duration in between each stage, and that if you break the sandstone the ability will end, that all in all is a great idea, if you want the move to be utterly useless, it takes 4 seconds to break sandstone without a tool, making it painfully easy to get out of this ability rendering it frankly quite useless in a player vs player match. The second inexcusable fault with this ability is that it allows the user to trap one player while permitting the slowing of other players, and in the time they are slowed, especially for waterbenders and chi blockers, can be killed using lavaflow or earthblast spam.

But while this suggestion has inexcusable faults, I believe they can be improved upon and that this is an avenue of Earthbending we should further explore. I will have to deny this suggestion dissapointedly.


My response:
The first flaw seems to contradict itself when you mention on how an earthbender can utilize this combo too well(?), proving it to be effectively overpowered against some elements.

The reason for the move being able to be ended by breaking the blocks is for a form of balance. It would be ridiculously broken if there was simply no hope for people breaking out of this move once they are trapped. And while you could argue that my idea in EDIT 3 for the move ending once the earthbender taking enough damage is enough balance as it is, that then leaves the opportunity for an earthbender to quicksand an opponent, then run away or just simply hide behind walls and stall for the combo to either progress or run away if the combo is to end if the stages are not progressed. That will not induce a fun playstyle with this combo, which is why there are many checks to make sure that the victim can actually break out of this combo if they try hard enough.

Additionally, a player focusing for 4 seconds on something that renders them defenseless is by no means a small occurrence. Within that time, moves can recharge, be prepared, or damage can be rapidly dealt, which transitions to the second flaw you claim.

The point of this move is to give earth an advantage. While by no means do I mean for this advantage to be simply overpowered, I believe I’ve provided enough counterplay for this advantage to be easily broken. An additional counterplay would be to simply stand on top of a surface that is not earthbendable, asfor this move could not work on there. One thing that would not be excusable, however, would be LavaFlow, and for that, I’ve requested a feature in the config that would not allow lava to be formed at all, with it being preferably turned on in the default config.
You must log in or register to reply here.
Share:
Reddit Pinterest Tumblr WhatsApp Email Link
Top